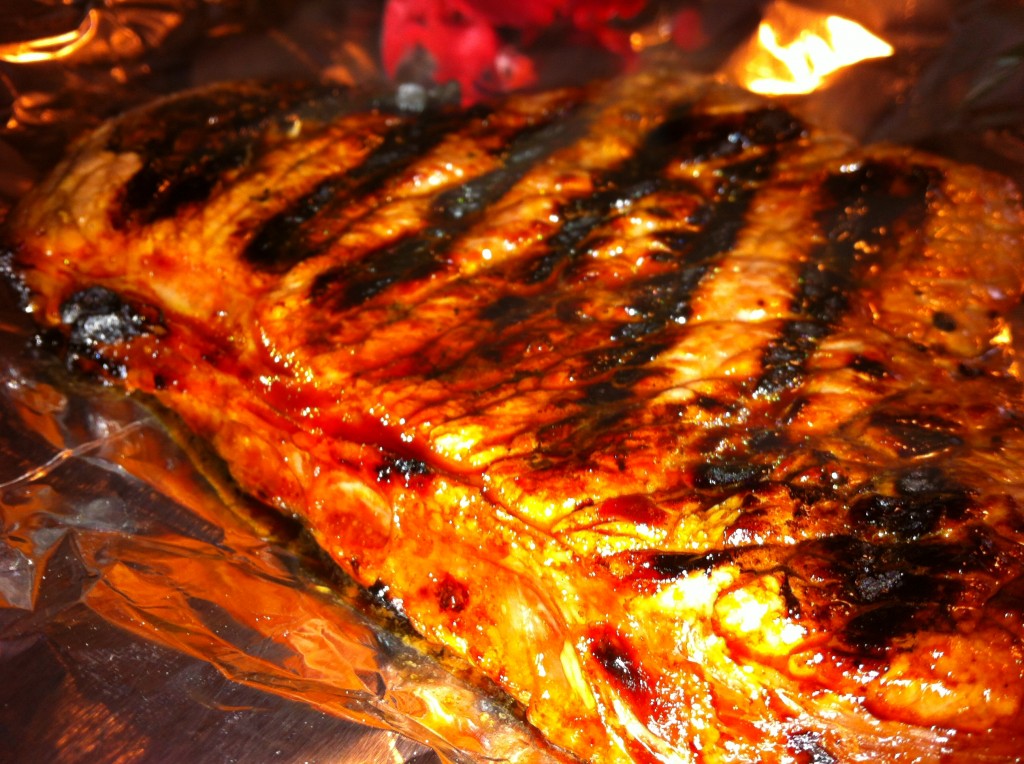 I used my Thai marinade on a London broil a few weeks back. I let it sit for the day and then grilled the meat on high for 5 minutes each side. I am not the most experienced griller and was taking it on faith that the grill guide I found was correct. Sure enough, 10 minutes later I had a tasty cut of meat that was medium inside. I personally prefer medium rare, but was aiming for a less bloody dish that would work for my husband too.

While the steak was on the grill, I dumped the contents from the marinade Ziploc into a 1qt pot on the stove. I heated the marinade on low and added in about a 1/3 cup of creamy peanut butter to make a peanut sauce. I tasted the sauce and decided more peanut flavor was necessary. I added a 1/2 cup total (including the original 1/3), not knowing that adding more peanut butter would tip the balance from having a sauce-like concoction to more of a spread.

My steak was done, and I pulled the meat from the flames to rest for 10 minutes. I gave up on fixing  the peanut sauce/spread, instead prepping the area to eat. In the end, I dipped tender cuts of meat in the peanut spread and didn’t mind one bit that I didn’t successfully make peanut sauce. Yum!

When I packed up the extra spread in small containers to top lunchtime salads in the coming days, I tried adding a tablespoon of grapeseed oil to each container thinking I could shake it up later and maybe thin out the spread. NOPE. No such luck. I dumped the spread on my salad and made sure to get some spread on my fork and then stabbed some lettuce et al. Still wasn’t a sauce, but sure was tasty.

Olivia and I used up the last of the spread by gluttonously dipping grilled chicken tenders in peanut-buttery goodness =) Bottom line: try turning your Thai marinade into peanut sauce and enjoy! If yours turns out, let me know your secret.