I bought a frozen pizza crust from PCC on Sunday. Today on the way home I stopped at the pet store which has a restaurant next door. The air smelled of pizza (to me anyway – the stand is actually Mexican food) and I decided to try out my crust tonight.

I went for something simple: 1 crust, canned organic pizza sauce, sliced black olives, cut up sun-dried tomatoes, and shredded raw milk Swiss. Before I started piling on the ingredients, I realized that the frozen crust didn’t have any baking directions. For shame! Why would you sell such a product and not tell your consumers how to use it? I then looked the place up online and through Yelp reviews found that this lack of attention to detail is just par for the course with Wheatless in Seattle’s business. I did not find any cooking instructions on their website or from other reviewers.

In the end, I preheated my oven to 400°F, added my toppings, and baked the pizza for 10 minutes. I checked on it and found the cheese not to be browned yet. I kept an eye on the pizza, checking back every minute or so. When the cheese was browned, I had left the pizza in the oven for around 15 minutes. Good to know. I’ll take note for next time.

The crust was decent for a thinner and crispy type of pizza. I *may* buy more in the future, but at $5-6 per crust (and they’re small, maybe 12″), it’s kind of pricey. I’ll be experimenting with making my own pizza dough soon enough, so I’ll let my reading public in on that recipe when I figure one out. Although I’m hoping to make a doughier pizza. Thin crust is fine on occasion, but I’d like to figure out a deep dish recipe and a traditional crust too. And by thin crust, I don’t mean that cracker style of pizza (which is also good on occasion). 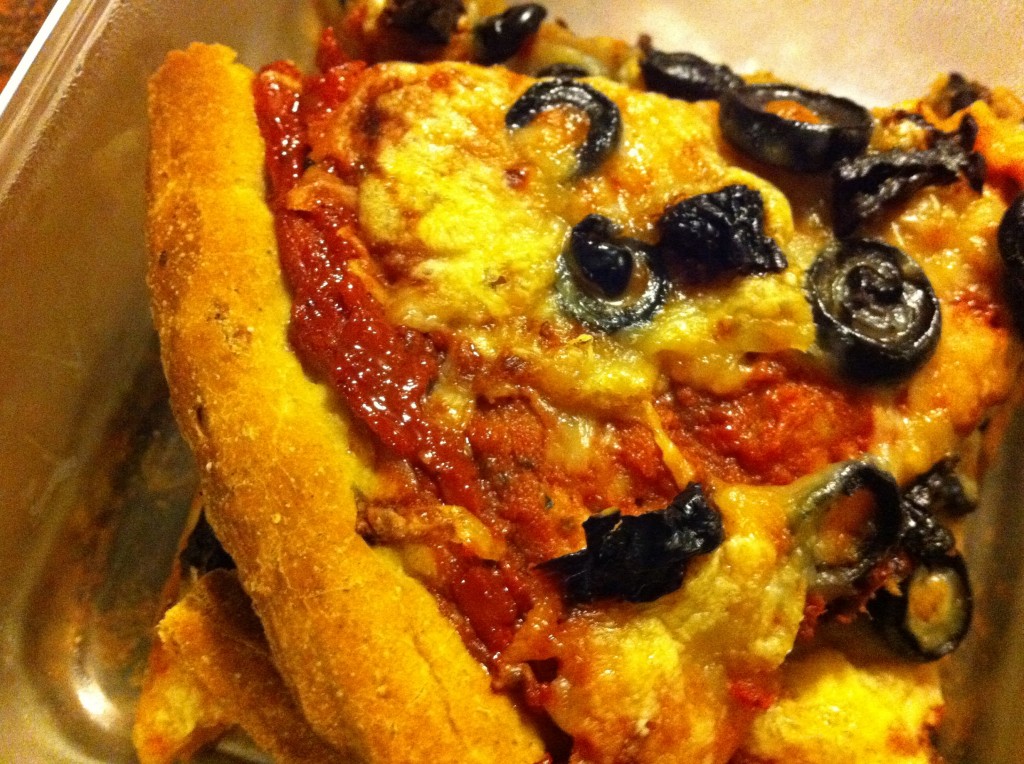 Not the prettiest picture I fear, but I forgot to take a pic until after I had eaten half the pizza =) So here’s my packed up lunch for tomorrow. You can see the crust looks pretty normal.